Samsung unveiled many things on Feb 20. There was 5G, there was some folding action, there were AKG tuned earbuds and all. But, out of all this glitz and glamor, the device that got me most excited was the cheapest phone in Samsung’s premium lineup this year – the Samsung Galaxy S10e. 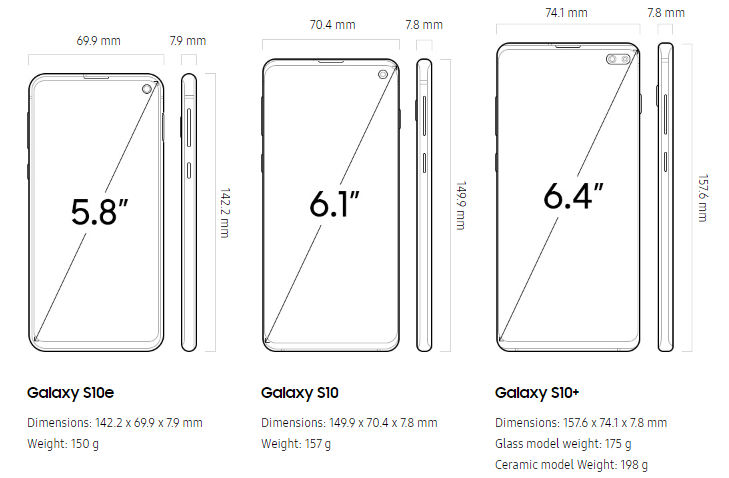 Samsung Galaxy S10e does not look as glorious in paper as its bigger brothers do. It has a 5.8 inch Dynamic AMOLED screen that is slightly lower resolution than the Galaxy S10 and S10 Plus but still looks sharp and vibrant and supports HDR 10. There is the same hole on the top right corner for the selfie camera as found on the Galaxy S10.

What the Galaxy S10e doesn’t have are curved edges. Curved side edges have been the hallmark of Galaxy S devices for a couple of years now but the Galaxy S10e has ditched that and kept a completely flat screen. And to be honest, I kinda like that. I have been using the Galaxy Note 9 for about four-five months now and I still don’t know what to make of the curved screen. It doesn’t serve any purpose other than to make the phone look unique and sometimes I find myself wishing the sides to be flat when I am writing something with my s-pen. Also, the flat sides look good on the S10e. I just have 0 complaints about this screen.

The next difference between the Galaxy S10 and the Galaxy S10e are the rear cameras. There are 3 on the S10 but 2 on the S10e. The S10e keeps the primary dual aperture lens and the wide-angle lens but ditches the telephoto lens. And to be honest, again, you are not losing much here. You will be a little worried if you are a sucker for hardware portrait mode then it might be something that will pinch you but I don’t think anyone else will bat an eye.

Inside, you have the same Qualcomm Snapdragon 855 processor that was found on the Galaxy S10. But the RAM is 6GB. Is it a problem? No. Pixel 3XL runs on 4GB RAM. 6GB RAM is fine for anything you’d want to do with a smartphone. You’d barely see any performance difference between this phone and the Galaxy S10. There is the option for 128GB internal storage and 256GB internal storage. The 256GB version comes with 8GB of RAM but if you are going to buy this version, buy a Galaxy S10 instead.

Now, what else is different. There’s one more thing. There is no under-screen ultrasonic fingerprint sensor here. Instead, you have a regular fingerprint sensor at the side of the phone. But the question is: Do you really need that? It’s a cool feature to have but it’s not a must-have.

Overall, when I look at it, I don’t see Samsung Galaxy S10e as a compromise version of the S10. I feel like it’s a minimalistic approach towards a premium smartphone that appeals to me more than the Galaxy S10 and the Galaxy S10 Plus. I like the flat sides; I don’t find myself wanting a triple camera setup, and I definitely don’t need an ultrasonic fingerprint sensor. Also, I am getting a far more pocketable form factor than the larger siblings.

So if I had to spend my hard-earned cash on any smartphone among the new Galaxy Smartphones today, it would be the Galaxy S10e. Apple tried to make a good ‘affordable’ premium smartphone with the iPhone XR but they didn’t quite succeed because of some servere compromises. But with the Samsung Galaxy S10e, it looks like Samsung has done what Apple couldn’t and made a smartphone that most people would want to (and should) buy.