Now that 18:9 aspect screens are the norm, thanks to Samsung, what is the next revolution for the smartphone industry? Please don’t say notches.

Though Samsung sits on the throne of the world’s largest smartphone manufacturers, its position is being threatened by the likes of Huawei who recently surpassed Apple to become the second largest smartphone manufacturer in the world. The weak sales of its flagship Galaxy S9 doesn’t help either. For so many years, Samsung has been at the forefront of the smartphone industry, but lack of radical improvements and upgrades in its recent lineup of phones have diverted public towards other manufacturers like Huawei and Oppo. However, it looks like things are about to change the next year.

There have been plenty of rumors about the epicness of the Galaxy S10. Talks on triple lens camera, ultra-sonic under-display fingerprint sensor, even thinner bezels, self-healing screen, and 3-D front cameras have all been floating around. Even if some features of this list makes into the phone, it would be mean higher sales from Samsung and hopes restored for its customers.

But there is another product, that has been lurking in the dark for a few years now, that can also show its face in 2019. We are talking about the foldable Galaxy Smartphone, known to most tech followers as the Galaxy X. Right now, the name seems to have become Samsung Galaxy F where F stands for foldable (probably). And no, it won’t look like the ZTE Axon M, it will be a continuous screen that can be folded. While you may think that that’s crazy. It actually isn’t when you look at the Foldable TV from L.G. Such technology exist. Samsung needs to make it better. We have seen renderings created by a Dutch blog Nieuwemobiel.nl based on the patents that Samsung filed. And they look lit. Here’s a sample. You can check out more of it on the blog we mentioned. 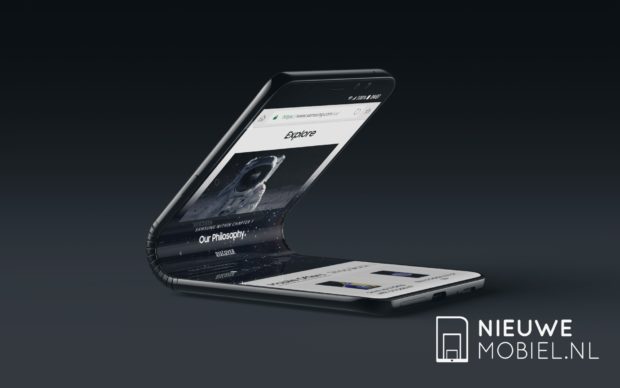 Think about the benefits of a foldable phone. It will give you more screen real estate in a smaller form factor. You won’t have to use two of your hands just to take a call. And even if you think current phablets are a fine size, imagine how much screen can a foldable phone of that size give you.

But if we are going to see it’s face next year, it will be crazy expensive. With Note 9 costing $1250, this thing might hit upwards of $2000. But a new technology is always expensive. It might take some years for this technology to be accessible to the general public.

What do you think about the folding phones? Let us know in the comments below.